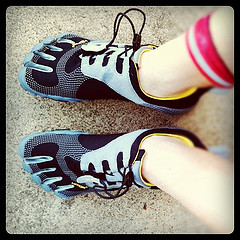 Were you one of the 70 million Americans who bought a pair of those unconventional “barefoot running” shoes by Vibram® that look like a foot with five toes? If so, you may be able to get some money back on your purchase.

Vibram, the company that manufactures the FiveFingers® shoes, recently agreed to pay $3.75 million to settle a class action lawsuit that accused them of false advertising. In the lawsuit filed in March 2012, Valerie Bezdek claimed that Vibram mislead customers by falsely advertising that the shoes provided health benefits while mimicking the experience of running in bare feet, without basing its claims on scientific research. Some of the advertising claims made by the company said that FiveFingers shoes:

The company denies any wrongdoing, but it decided to settle in order to put the case to rest and avoid paying further legal fees.

While the thin-soled, flexible shoes typically cost about $100 a pair, Vibram will reimburse consumers who bought the shoes after March 21, 2009 for up to $94 a pair. However, based on similar settlements, it’s more likely that you’ll only receive $20 to $50 per pair.

As an additional part of the court settlement, Vibram can no longer make any future claims about the health benefits of its FiveFingers shoes.

In August 2012, the WalkEZStore featured a blog post about this lawsuit. In the post, we stated that while barefoot running advocates claim barefoot running leads to better foot biomechanics and lessens the risk of injury, experts say it can actually have a negative impact on foot health.

Per a position statement from the American Podiatric Medical Association, “Barefoot running has been touted as improving strength and balance, while promoting a more natural running style. However, risks of barefoot running include a lack of protection, which may lead to injuries such as puncture wounds, and increased stress on the lower extremities.”

Additionally, minimalist shoes, like Vibram FiveFingers, can actually increase the likelihood of injury in runners, according to a study published in the British Journal of Sports Medicine in December 2013. Researchers found that minimalist footwear, like the FiveFingers shoes, specifically increased pain in the shin and calf in those runners wearing these types of shoes.

Therefore, along with the experts, the WalkEZStore doesn’t recommend that you run bare foot or in minimalist shoes. In fact, if you are a runner who experiences foot pain, we recommend that you consider wearing our ezWalker® Performance Custom Orthotics in your running shoes. Our custom orthotics are designed to support the arches of your feet while bringing your feet and whole body into proper biomechanical alignment as you run. With ezWalker® Custom Orthotics, you’ll have greater stability and balance with each step you take. And you’ll experience less pain in your joints.

Ultra thin and ¾ length, ezWalker® Custom Performance Orthotics will fit in your running shoes with ease. Plus, they come with a 90-day, money-back guarantee. So for maximum comfort when you run, order your pair today.

Because … when your feet feel good, you feel good.® And you’ll run even better.